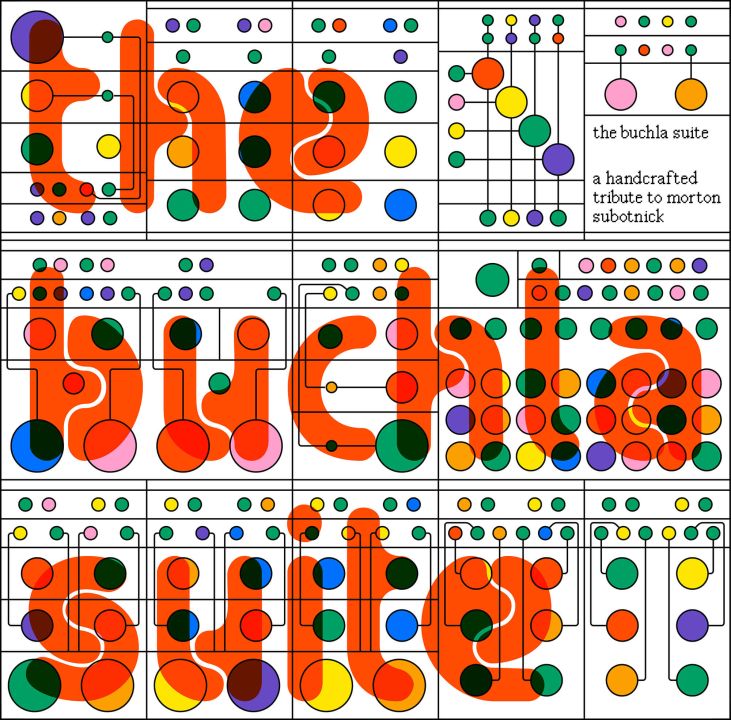 The Buchla Suite: A Handcrafted Tribute to Morton Subotnick is the latest project and sound-exploration vehicle for Stefan Schultze’s Large Ensemble. The project was inspired by Morton Subotnick’s seminal composition Silver Apples of the Moon, which was released in 1967on Nonesuch Records. The piece was written for the Buchla-100 synthesizer, which Subotnick designed in collaboration with engineer Don Buchla. The introduction of this instrument, and Subotnick’s compositions which utilised it, defined what is now considered the West-Coast style of sound synthesis. His work has had a lasting impact on generations of electronic and electroacoustic musicians.

When I first heard Silver Apples of the Moon, it captivated me in such a way that I was inspired to write a new program related to the work. I find it fascinating that this piece is as relevant today as it was when it was created! – Stefan Schultze

The Buchla Suite is an investigation into how a full ensemble might implement the functionality of a synthesizer, i.e., what it would mean to apply the logic of an oscillator, a sequencer, a filter, or chaos generator to the compositional process. Although the suite uses Silver Apples of the Moon as a touchstone and starting point, it is not a one-to-one translation of Subotnick’s opus or the result of an act of transposing electronics into an acoustic idiom. What Schultze is much more interested in than a fixed aesthetic proposition is the creation of a language that can be utilised to unlock unprecedented outcomes.

The first results of this ongoing sonic research will be recorded at Deutschlandfunk September 5-9. A series of live dates at a variety of jazz and electronica festivals is being put together to share the material with a wider audience. The highlight of this series of events will include a double bill with Morton Subotnick at the Sinuston-Festival Magdeburg.

Stefan Schultze’s Large Ensemble was founded around the idea of a perpetual expansion of the aesthetic and organisational principles governing a large ensemble formation. That, and an insatiable drive to produce elegantly crafted sonic artefacts. The outfit consists of a rotating cast of highly specialised instrumentalists, each with a unique voice and an idiosyncratic approach to their instrument. While seamlessly switching between linear and non-linear modalities, the hierarchical and non-hierarchical, they’ve been steadily forging new pathways – connecting dots between new music, jazz and classical; things high and low-brow, future and past. Their latest project is titled The Buchla Suite: A Handcrafted Tribute to Morton Subotnick, a formal and aesthetic exploration loosely based on Subotnick’s seminal Silver Apples of the Moon LP (1967).

These videos were shot in February 2022 at Rabih Beaini's studio (Morphine Records) based in Kreuzberg, Berlin. The extracts were taken from The Buchla Suite, which is a tribute to Morton Subonick’s Silver Apples of the Moon. Part IV is subtitled The Arpeggiator, because the piece was written around an arpeggiated line. Part X is loosely based on the feel of the last few minutes of Silver Apples of the Moon. Part VII features an alto solo moving over constant meter variations, this creates an impression of the music being programmed or controlled.

I began working on The Buchla Suite with my ensemble in 2020, during the lockdown. We began to explore the album Silver Apples of the Moon through repeated listening and different approaches to improvisation with the material, and free association. We sent the recordings back and forth between the different members of the ensemble, and worked together in small groups, in a rehearsal setting. This allowed the ensemble to engage in a collective compositional process. The act of composing The Buchla Suite as a live set, and an album which will be recorded at Deutschlandfunk – and will punctuate in a collaboration with Morton Subotnick (at Sinuston Festival) – that came later. Some of these snippets were produced at Alexander Frangenheim's studio boerne in Berlin.

Buchla Suite – Exploration I – Beginning was the first exploration. It’s based on an improvisation around the sonic material from the beginning of the Silver Apples of the Moon. Part I  has been changed, as far as the concert program is concerned, but I still like to show it as part of the documentation of the process. It shows the close connection of this material to Silver Apples.

Buchla Suite – Exploration II – The Song Of Wandering Aengus is a free association with the title Silver Apples of the Moon. In an interview with Morton Subotnick, I read that this line was taken from The Song of Wandering Angus, a poem by William Butler Yeats. As I understood from the interview, Subotnick's intended connection to Yeats is very “free,” so, I thought that I would do the same with the ensemble. Based on a prepared piano track that I composed one morning, we used the entirety of a Yeats poem for this free interpretation. To be completely honest, sonically, this piece might not have anything to do with Silver Apples of the Moon, but it was a part of the process. We were all "in it" while we were working on this, and I like it, because it really happened spontaneously. We recorded all of the parts one after the other, all of them were so called "first takes" (including the voice/text). It's one of those things that just happens and wasn't planned in any way. I'm not sure, yet, if this will ever be played live.

Buchla Suite – Exploration III – Improvisation is based on a piece improvised by our guitarist Peter Meyer. I sent him a snippet of Silver Apples of the Moon and asked him to record an improvisation in that mood: recreating the feel of the Buchla synthesizer. We used it as the basis for a studio session with Almut Kühne, Peter Ehwald and me on prepared piano – we overdubbed his recording as a live trio.

Stefan Schultze
(Artistic director)
This email address is being protected from spambots. You need JavaScript enabled to view it.


Julia Schmitt
(Management)
This email address is being protected from spambots. You need JavaScript enabled to view it.
+49 178 4407738